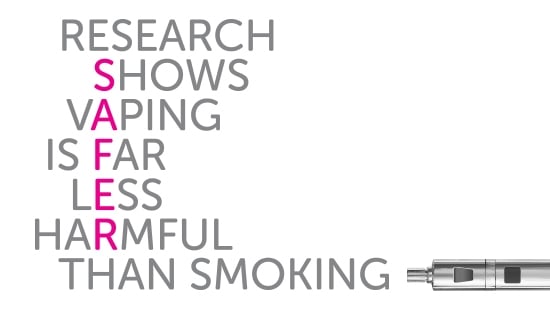 Most importantly, CRUK has ensured the most important message stays at the forefront of their introduction of vaping: E-cigarettes do not cause cancer.

Reiterating on important information gathered from research in the last few years, the piece also offers an important reminder that E-cigarette users have been shown to have dramatically lower levels of toxins and carcinogenic material within their bodies.

Furthermore, despite a number of media panics, no evidence has ever surfaced that E-cigarettes cause popcorn lung, and modern regulations have banned the supposed culprit chemical entirely.

With regards to price, CRUK also notes that using E-cigarettes can save you around £210 every 3 months when switching to vaping.

This is not the first time that anti-smoking bodies have voiced their positive opinions towards vaping, in 2017 we saw Public Health England and the British Lung foundation offer support and praise for the industry.

Throughout 2014-2017, we also saw a wave of studies into the the short term and long term effects of vaping, which shed light on the drastic improvements making the switch can have on a smokers health. Reductions in carcinogens and toxins mean a lowered risk of cancer, lung and heart disease, which will help to mitigate the damage done by the smoking industry.

CRUK is yet again reminding us of what we already know. Vaping is, and has always been significantly safer than smoking. With more support from bodies like CRUK, 2018 could be the year the restrictions on vaping are reevaluated. And its about time, don't you think?